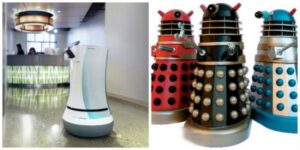 On August 20th at the Aloft in Cupertino, California, the Starwood Hotels group will launch a pilot program that will put a robot, name ALO (el-oh), inside the halls of the hotel for the pleasure of guests. The 3 feet tall robot will come complete with a vinyl robot butler uniform because, no one wants to run into a Dalek on their way to the breakfast buffet.

ALO doesn’t ask for tips, but would rather be rewarded with a star  rating so that it can build up enough points and marry Yelp.

Brian McGuinness, the Senior VP of Aloft, doesn’t think that the point is to replace staff but rather to provide an additional tier of service.

The makers of ALO, a start up in Sunnyvale, California called Savioke, think otherwise because they got $2 million from Google Ventures, and they would like to see their robots in hotels, old people’s homes and hospitals.

Starwoods has a deal in place with Savioke until the end of 2014. No guarantee that this whole robot thing is going to take off, but no one at Starwoods seems to have ever seen a Terminator movie so, don’t hold your breath.

In the meantime, tell us that this video is not creepy: