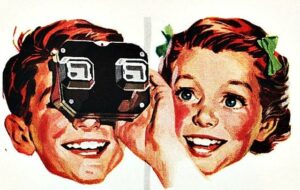 The future of Oculus, the VR headset startup, may be looking a bit brighter now that they’ve been purchased by Facebook, but even Facebook can’t change history. And the history of VR headsets is littered with epic failures – actual failures not virtual ones.

On the upside? Oculus raised a fair bit of cash from crowdfunding and got bought by Facebook. Is that going to change how people think about clunky VR headsets? I seriously doubt it. People don’t even like to wear 3D glasses while watching all those…um…those few HD programs available in 3D.

I’m pretty sure that virtually everyone who has ever tried on a VR headset said ‘Well that’s sort of cool…but I’m not going to buy one.’ And they’ve said that over and over again every time a new VR headset hit the market. Don’t believe me? Name one successful VR headset company from the past twenty years. Or you can do a quick search on VR headsets and count the number of headsets that aren’t Oculus.

But apparently Oculus and Facebook are wandering through their own virtual utopia.

“Do we want to be Game Boy, or iPhone or Android?” said Oculus CEO Brendan Iribe at the recent TechCrunch Disrupt NY. “I think Game Boy is an awesome platform, but I think you’ll see handheld gaming largely disrupted by the mobile market…And for VR where we want to go, connecting a billion people, do you want to be building a platform that has a billion people on it, or 10 or 20 or 50 million people…for game developers, they’re going to a have a lot more success shipping their content into…a platform that has a billion users, more than 50 million or 100 million. And consoles and gaming-targeted devices usually only get to a 50 to 100 million total audience.”

Just because there are a billion potential customers out there doesn’t mean they will automatically buy something they don’t want.

Pretty much everyone who has ever tried to cash in on virtual reality has failed and it wasn’t because they didn’t have access to enough potential customers – it was because no one wants VR and they certainly don’t want to wear some silly headset.

I hope I’m wrong. I really do. I have always been fascinated by VR (I even own a VR headset manufactured by one of those failed companies – but it never worked very well). And I really hope that Oculus and Facebook somehow find the magic formula. But if the past is any indication of what we can expect in the future then all their virtual plans are going to result in actual failure.