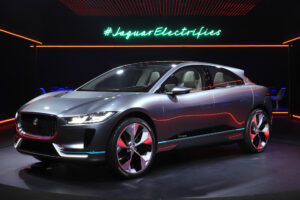 At Dell EMC World last week, one of the most interesting conversations I had was with the Jaguar CIO who is driving what has been an incredibly successful IT effort at Jaguar. In their new “Green Field” plants, he championed what used to be called Dell’s VCE platform with nearly unbelievable result in terms of productivity and uptime. This was fascinating to me for several reasons; 1) it was a showcase for the power of the Hyperconverged concept, 2) I own two Jaguars, and, 3) I’ve been trying (so far unsuccessfully) to order the new Jaguar iPace. Oh, and, 4) when I was younger, for a time, I was a Jaguar mechanic.

So, this was a chance to blend my car hobby with my passion for the concept of how to do IT successfully. But I also came around to the idea of IT Entropy because, during the event, I found out there were some unhappy Dell Hyperconverged customers and the cause was something I’m calling IT Entropy which will likely hurt Jaguar’s effort to convert old plants to this new concept.

I’ve had a chance over the last year to look at new plants from Jaguar and Tesla and compare them to the huge plant that anchors Mercedes. The end result was that I truly regret buying my latest car, a Mercedes GLA, because of the difference between how cars are built in current plants and how they are built in some of the aging plants.

The Mercedes plant, like a lot of aging manufacturing facilities, was largely manual, had lots of material contamination, and likely suffers regular shutdowns. In the short time, I was there I saw them pull off nearly 20 cars with apparent defects, one line failed entirely, and an ancient computer system did a great job of confusing an experienced installer. Plus, this was basically on just one Mercedes assembly line.

In a modern plant, like the ones Jaguar recently built, the line is more like a clean room at a microprocessor or computer facility. Contaminants are kept out, the line is largely automated with robots, and at the center of it all is a hyperconverged computing system that runs like an appliance. Where in an old plant line outages are measured in times per week or even day, in Jaguar’s new Dell EMC-powered hyperconverged plants, they measure outages semi-annually (they are currently running 19 months without an outage).

This all ties back to massively higher plant yields, gains in quality (there was a time that “Quality Jaguar” was an oxymoron) and far lower costs. This should pay huge dividends when they eventually move to an appliance car like the iPace or the coming wave of autonomous vehicles.

But this is all with new Green Field plants and moving these innovative concepts, particularly in IT, to existing Jaguar plants has run into problems.

While most folks who bought into the old VCE converged system concept are ecstatic, there are two classes of customer that aren’t. One is the customer who has institutionally forgotten what they had before they installed a Hyperconverged system. This isn’t uncommon because when these systems come in, the labor needed in IT drops like a rock often resulting is massive reassignments of old staff and the hiring of new people. This means that the new folks never saw how bad it was and lose comparative perspective. This is an easy fix, and Dell EMC is now aggressively helping these firms research the problems they used to have to shock them with savings that generally exceed 30% and showcasing that these very expensive hyperconverged systems actually paid for themselves, often within two quarters.

The other problem is more challenging. It is that once in, some sites started to run their hyperconverged systems as if they were normal, organically-built solutions and start doing updates and hardware upgrades ad hoc. A good comparison would be if you took your new Jaguar and swapped out a lot of the original components for aftermarket alternatives, a practice that tends to reintroduce complexity and bottlenecks, and increases the likelihood of failures. I call this IT Entropy or a tendency fof IT staff to regress back to old habits and processes that unintentionally breaks the new model.

As Jaguar moves their efforts in Green Field facilities to existing plants, some of which date back to the beginnings of the company, IT Entropy will likely be the hardest thing they’ll have to overcome. In fact, I’d bet, they will eventually conclude that updating old plants, while seemingly less expensive, will cost more if you add in lost productivity and quality, and increased downtime than building more new facilities from scratch.

The sharp contrast for me between Jaguar and Mercedes and between hyperconverged and traditional data center solutions, both in IT and on the factory floor, is pronounced. The best benefits in both cases occurs when the firm steps sharply away from the old way of doing things and fully embraces the new model. This, I expect, is not too different from what Henry Ford initially did when he introduced volume car manufacturing in the first place.

But, to hold on to these improvements, you need to ensure that people are aware of what they were doing wrong in the first place, as well as that they don’t forget that the new model doesn’t work with old behavior. Otherwise, they’ll revert with an equally adverse impact on productivity, quality, and costs, eventually eliminating the gains they enjoyed by moving to a hyperconverged platform in the first place.

I also wonder if there isn’t another mistake being made. You see, in cars (and pretty much everything else), benefits to buyers will be felt with products that are built like appliances, like the iPace and Tesla, but most buyers won’t know the difference. I think we should favor cars, both new and used, that were built using these new far more consistent methods and encourage automakers to embrace those technologies. Over time, perhaps, the most important feature about any vehicle (because it speaks to quality) might become how it was built rather than who built it.

Something to think about.

How to Choose a Reliable VPN Application?

What CAFFEINE Really Does to Your Skin