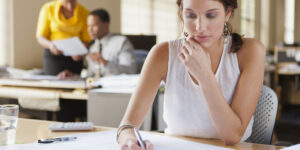 Few things can be more saddening for a business-owner than losing apt employees. This loss does not impact only the owner with high turnover rates and the costs invovled with continually re-training. It also affects other employees, too, with increases in job insecurity and sometimes even resentment.

It is very important to maintain high morale within the company, so staff feel motivated to help you reach your professional goals. Considering all these, we will give you a few tips on how to do just that – ensure that your employees are not looking for other jobs behind your back.

One thing to keep in mind: it’s not all about premiums.

1. Have one meeting per day

Most companies lose employees because they don’t give the social factor as much credit as it deserves. Going to work, resuming your seat in the cubicle and not talking to anyone for 8 hours can be extremely disappointing for some people.

Have a morning or noon meeting during which you discuss anything but work. Get to know each other. Better still, let them know you – the boss. Talk freely for 30 minutes. In time, you’ll see how those meetings will build solidarity with your group.

Each employee must feel like they’re part of a machine that would not work without them. Saying a “Thank you” once in a while is not an option, but a necessity, if you want your employees to stick around for as long as the company will endure. As a leader this takes a great deal of authenticity and awareness, but is worth learning now if you feel you lack in this area. When everybody knows they’re doing their job right, the sense of “collective” is enhanced, and so is morale.

That does not translate as “indulge the ones that take every chance there is to complain.” Take a personal interest in listening carefully to the problems they are facing with performing their jobs. First of all, that will improve your management skills; second of all, your employees won’t feel like third wheels.

Give them a chance to express their problems and, if feasible and commonsensical, accept their suggestions.

4. Take the most difficult task off their shoulders

Regardless of whether it’s an eternally impolite client that your employees are terrified of dealing with or filling some tedious charts, you should lead by example, at least temporarily. It’s not taking the lead that influences the team positively, instead it’s recognizing that the task can be done.

Before anything else, a boss must be a role model for his employees. When you offer your help, even sporadically, morale will surely go up.

5. Go out for beers at the end of the week

There are very few business owners who agree to go out with their employees, and there’s no good reason for that. In fact, it’s recommended you do so. Bonding is vital for a team and spending some time together outside of work can facilitate that.

At the end of the working week, gather up your employees and head out to the closest pub (or coffee shop if they’re that way inclined). They definitely won’t be expecting it, especially if they’ve been accustomed with just coming to work, doing their jobs and leaving with the same bored expression on their faces.

With the lean process structures of many small businesses it can be expensive to entertain employees. That said, it doesn’t have to cost an ar and a leg. Ideas include a talent show, a book club, watching movies or heading out on a local trip. As long as it breaks the monotony of spending an entire week in between four walls, anything will do.

Do something different on a regular basis, so the atmosphere in the office during working days does not become sterile. All you need is a rich imagination and morale will boost itself with no effort on your part.

Nobody will ever stay at a job where it’s just working until they eventually crack under the pressure. No matter how busy the day is, always respect their lunch and coffee breaks. You cannot possibly have high morale when you get nosebleeds caused by over-straining, both physically and mentally.

Nap breaks are picking up ground at a fast pace. They have not been implemented worldwide as of yet, but why not break the ice? 20 minutes is more than sufficient. You’ll definitely become “Boss of the year,” and your employees will certainly stay around your small business.

It’s not that difficult to keep your employees motivated once you make an objective out of it. Giving money as presents is certainly not always the most productive and original way of boosting morale in the long term. Instead, try to implement these morale boosting tips and be rest assured that you won’t need to beg the best person in your staff to stay in your company.

Joe Flanagan is the Senior Career Advisor at Velvet Jobs – outplacement services, with successful premium career matchmaking and a job placement guarantee. When he’s not trying to reduce the unemployment rate you can find him hitting the gym and curating his ever growing Spotify playlist.