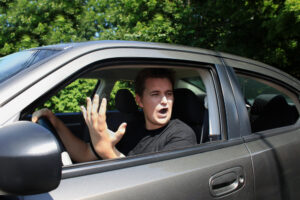 GoPro revolutionized the world of outdoor adventure sports by turning every athlete into an action star. Suddenly, the most mundane activities could be filmed in high definition and uploaded to Youtube.

And, those athletes with a knack for their sport could become overnight viral celebrities.

However, there was another, tangentially related benefit to these cameras: you could record other people acting like idiots.

Bicycles (and motorcycles) are the target of both witting and unwitting idiotic behavior. From a car accidentally pulling out in front of you to a local farmer, frustrated by how slow a cyclist is climbing the hill, throws a slushie at him as he passes.

In more severe cases you have those scenarios where a dump truck runs a cyclist off the road, laughing to himself (and possibly yelling out the window of his vehicle) as the rider dives out of the way of their tires. Sometimes, punches are thrown.

In some of the worst cases, guns have been drawn, and shots fired.

These are all real scenarios which demonstrate that the level of road rage that drivers are prepared to escalate to is downright scary and life-threatening.

With that in mind, more riders are getting proactive and adding cameras to their bikes. These bike-mounted cameras are getting cheaper, and bike review blogs like davescheapbikes constantly review new models.

With a camera, cyclists can share their incredible rides. But it also gives them protection against threatening drivers.

The GoPro has been the leader in this regard. They come with helmet mounts and offer excellent visibility from this vantage point. Plus, most drivers notice when one is installed and tend to be more respectful around the cyclist wearing a visible camera. In this regard, the camera also serves as a deterrent to crime.

However, helmets can get uncomfortable as they are. This discomfort is especially true on long rides.

It made sense that riders would begin looking for options to mount on the bike frame. And manufacturers were happy to oblige. Even the GoPro offers a frame mount.

This lower mounting position may not offer as much visibility as being mounted on the helmet. However, in some regards, it provides a more stable picture as it is not moving in sync with the rider’s head.

Additionally, it is one of those devices that can mostly stay on the bike unless it needs to be charged or have data downloaded from it.

How To Be Taken Seriously

The challenge with this footage is getting law enforcement to take the complaint seriously. Cameras help. But camera footage can also be doctored or altered.

The possibility of footage being altered can create a challenging scenario in court cases to ensure that the folks are not being needlessly harassed or brought against false charges.

The prosecutor will need to ensure that your camera footage is legitimate.

Accordingly, the chain of command is essential. In some cases, the law enforcement officer may need to retain your camera — or the memory card from your camera — as evidence in the claim.

It is also important to remember that you, the cyclist, are also being photographed at the same time. Even though you may be emotional, it is critical to talk in philosophical terms, be non-confrontational and to avoid swear words.

You don’t want to be in a court case where you are perceived to be inciting violence or antagonizing another party.

The reality is, by the time you call the cops and they arrive, the angry, slushie-throwing farmer will be long gone. Most police are too overworked to pursue these types of cases (although, sometimes in small rural communities you can get lucky). You can file your claim with the local police officer or, later, at the local precinct, but a frustratingly large amount of these cases are never pursued.

Even if the camera footage is not adequate for a criminal prosecution, often it can allow you to pursue a course of civil litigation. Since these cases are only being tried for monetary reimbursement, there is more flexibility in the level of proof required.

Where there are no monetary damages to pursue and the police are unwilling to take up the case, there is always the ever-available court of social justice. These videos get plenty of viewership and shares. Most people are upset by the act of unkindness, and the videos can serve as a lesson in how not to act. Plus, you get the warm, fuzzy, feeling of having shared your frustration with the world.

It feels good to get to call these actors out for their behavior publicly.

And, these cameras can serve as proof to exonerate you against the claims of an irate driver.

Buying a hardened, sports-ready camera with sufficient stabilization to capture a usable picture is not the cheapest bike accessory you will purchase.

But for the cyclist who spends a lot of time sharing the road with cars, it can make all of the difference.