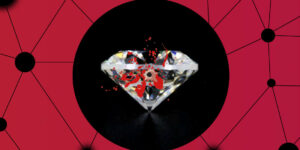 Conflict Diamonds are generally mined by slaves and the money is used to fund illegal activities including violent insurrection, slavery, piracy, and terrorism. They are outlawed but find their way into legitimate jewelry supply chains through document forgery, bribery, and fraud. In short, the diamond industry has found it nearly impossible to effectively block the sale of these illicit jewels until recently.

The answer that is being showcased at IBM’s Interconnect 2017 conference today was created with Everledger, IBM and the use of something they are calling the Cognitive Blockchain, a combination of AI and Blockchain technology that is making massive inroads into the identification and the elimination of Conflict Diamonds and the related massive reduction in the criminal activities they fund.

Let’s talk about how this amazing accomplishment is being done.

To many of us Blockchain is connected to Bitcoin at the hip and it is because it is the technology that made Bitcoin, the digital alternative currency, viable. But if you set Bitcoin aside what Blockchain does is uses multiple levels to assure trust between communicating systems. While this certainly is critical for monetary transactions, which is why it was initially focused there. But it can assure any kind of transaction whether that be monetary or physical validating both the buyer and the seller and making fraud far more difficult to accomplish. It also had one huge additional unique value. Because it used tokens, buyers and sellers could be validated without being identified to each other. Thus, if you wanted reliable secure method of doing anonymous transactions Blockchain was and is ideal.

But it has no inherent concept of legality, which is why it is often favored alone with Bitcoin for illegal activities, and the very anonymity that protects buyers and sellers while validating them could work against an effort to eliminate false or illegal physical goods entering the process. With Bitcoin, because each coin has a digital designator that can itself be validated this wasn’t a problem but with Diamonds it could be.

But diamonds or any unique good, can be digitized simply by creating a unique serial number and attaching it to the item and then making sure that process can be validated. Given they use lasers to mark diamonds that are legally mined and register them such a process does exist and, once in the system, the physical and digital location of these goods can be maintained and tracked. Now, potentially, if these diamonds are stolen or the numbers forged, anomalies in location and ownership would trigger forcing revalidation check. However, with millions of transactions occurring all over the world with millions of non-compliant diamonds even this didn’t apparently go far enough.

So, the final step was to add AI capability to the solutions. This was so that anomalies with the diamonds could be caught very early on and the transaction could be failed before any funding changed hands. This process now effectively monitors all the transaction that occur daily and can immediately block transactions with any fake, or conflict product effectively eliminating most of the opportunity for even entering an illegal diamond into the process thus fully preventing any sale that used this system forcing compliance with the law and removing much of the market for Conflict Diamonds eventually.

I find it fascinating that a tool often connected to some kinds of illegal activity appears to be the best tool to eliminate some of the most unacceptable, the trade of Conflict Diamonds. It took a company like Everledger that was motivated to put in the tremendous effort to conceptualize a fix and a company like IBM with the research resources and technical competence to turn that conceptualization into a real offering. The result should be a vastly safer world. Now given this solution could address a far wider variety of counterfeit (including currency), fraudulent, and criminally illegal transactions I wonder how long it will be until it does.

Experiencing the best casinos on the Vegas Strip: a guide