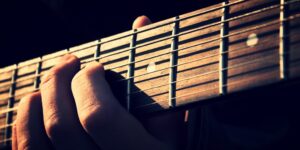 Playing a sold out show to adoring fans is something that every musician likely dreams of doing. But before you get to the dizzying highs of playing in Wembley or Madison Square Garden, you’ll have to struggle and fight your way to the top – and that means playing a lot of local gigs. Every major city has at least a few spots where live music can be heard, and if you’re lucky enough to have earned a place on the stage, then it’s your job to promote it heavily.

Luckily, there are several cheap and simple methods in which a musician can advertise their own show. Just make sure you promote the gig several weeks before the actual date, as you run the risk of playing to an empty room if you leave it to the last minute.

It’s easily the most well-trodden route to promote something, but putting up posters and leaving flyers around your city can definitely get you noticed and drum up interest. This is because posters and flyers are generally placed wherever a lot of people are going to be, i.e. colleges, cafes, bars, and shops. When asked for permission, the majority of these places don’t mind you putting up posters or leaving flyers around.

The only problem with posters and flyers is that, well, a lot of people are probably doing the same thing as you. To combat this, you’ve got to make sure your design is eye-catching, with easy-to-read fonts, clear information, and high-quality photos. Otherwise, no passerby is going to take the time to read your poster if they can’t understand what it’s for! It’s a good idea to have a look at this site if you’d like to find out about templates and prices from an online print shop.

Many musicians find Twitter very useful, but if hashtags aren’t your thing, then you should already own at least a Facebook page. If you’re a musician with a desire to be heard, then this is especially important if you wish to start playing live shows. Not only can the page contain links to your music, but also info on when your next gig will be. If you’ve got a show booked with a venue in say, three weeks’ time, then use that period to build up hype and attention like there’s no tomorrow.

Create a Facebook event for the show, invite everyone on your contact list, and be sure to bring out the inner salesperson in you; tell everyone how amazing the show will be, all the great music they’ll hear, how cool the venue is, how cheap the drinks are (people will definitely love that) – basically any reason for them to check out your gig. Also, remember to keep people updated about the show leading up to it, especially regarding things like stage times, entry price, line up (if there are other musicians on the night). Find out more about using social media to promote gigs here.

Nothing spreads faster than word of mouth. This might depend on how confident you are, but if you see a group of people that look like your target audience (i.e. metal heads, punks), then hand them a bunch of flyers and tell them about your show. Met a cute girl at the bar last night? Tell her you’re playing a gig next week. Inform your colleagues, friends, family, basketball team… whoever you’re closest to. Don’t tell them that they have to come, but instead inform them and let them make their own decision.

Finally, one fantastic method to get the promotion and excitement at fever pitch is to actually perform a ‘free’ gig of sorts. Busking is a great way for the general public to hear your music and get a feel for your live performance (plus giving you some more practice). You can leave flyers for your upcoming gig around your gear, plus some demo CDs too if possible. Check your city’s laws regarding busking in the public, as you’ll likely require a permit.

Good luck and give them the best show of their lives!

What are the litigation and legal liability risks your start-up can face?