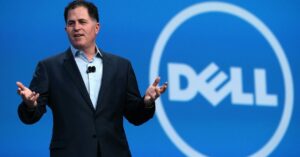 Dell Technologies is a vastly different company than Dell Computers was, they started out as a differentiated Apple like firm loosely tied to Microsoft and Intel. Today they are more like a new age umbrella company like old IBM was, but without their old lock in mentality, with far more control over their environment and ecosystem. However, people tend to, once they form an impression on a thing, hold that impression. This often forms the foundation for a rebranding argument as it is often less expensive to create a brand than it is to alter the impressions that surround it. However, given I can’t seem to point to an example of where that has ever been successful, the only viable path may be to work to change the perceptions you need changed surrounding the brand.

Now with Dell the change isn’t the typical one where mistakes of the past haunt the present however the same tools likely would apply. For instance, while I was at IBM that brand went negative due to some truly horrid management decisions made at the firm in the late 70s and 80s. To change that impression Louis Gerstner put together a unique team of advertising experts who, over a period of 5 years, largely rebuilt IBM’s image. It still surprises me to this day that one of the first things Gerstner’s successor, Sam Palmisano, did was dismantle that massively successful marketing effort.

Dell appears to be flirting with a similar effort to change their image as this video showcases. It isn’t yet at the level of IBM’s far better funded effort, but their need isn’t as critical either. Let’s talk about this video, and why an effort like this should be more common than it is.

Challenging The Existing Image To Recreate it

This CNBC video recrafts Dell’s history, not so much from what it was, but from how people see the company. The image that surrounds the brand is one of a PC company that provided what was likely a lackluster company machine you probably didn’t much care for. Most of how we touched Dell wasn’t with the stuff we bought ourselves but with the hardware that was bought for us using the typical lowest bidder approach.

I know, from my own experience, the Dell machine that Forrester gave me sucked and it was actually one of the reasons I left that company. Ironically, the machine I most wanted at that time was also a Dell, but it was their then XPS box which was focused on gamers and had a World of Warcraft theme. But, if I was like most folks, I’d have only seen what I was given and connected that less than happy experience to the Dell brand.

Now if you can recraft that memory to make it so that people see the bigger picture of what Dell was and then take them up to what Dell is then you may be able to get them to reconsider their out of date and incomplete view of the company.

By the way, it is interesting to note that part of Dell’s problem Dell created. By focusing for a time on being the low-cost provider they didn’t realize they were building up a set of negative impressions that would haunt them into the future. They now get that building visible quality into all products is important to the brand and, even in PCs, this makes the firm a very different company than the one most seem to recall.

The film takes the audience back to the foundation of Dell in a dorm room by a medical student and then it’s parallel rise with Apple. It briefly, (it is only 12 minutes), profiles Michael Dell and uses an analyst (sadly not me), and a reporter to help tell the story. Interviews with Michael Dell and Jeff Clark (who looks really tired or sedated) help fill out the story. Jeff has been doing the day to day management over Dell Technologies for some time and he has, apparently, been a counterpoint to the trend of successor CEOs who have failed (Meg Whitman and Steve Ballmer come to mind) of late as his performance has been exemplary. I think a customer that has been with Dell throughout would have been a strong core for this effort and they’ll likely do that in a future film.

Now, as a stand-alone, this video wouldn’t have much impact (it doesn’t have viral potential and it is doubtful a critical mass of people will see it) but as part of a campaign on this it forms a nice foundation for what is likely to come.

Wrapping Up: Changing Impressions Is Hard

To a certain extend Dell, and pretty much every company, digs itself a hole when they first come to market. This suggests that it is important to not only message on what the company is but on what the company wants to become, so as the firm evolves, the image of the firm evolves with it. In Dell’s case I doubt the EMC acquisition was ever part of Dell’s long-term vision until the day Joe Tucci, EMC’s prior storied CEO, pitched the idea.

The other thing that Tech companies, even Apple these days, just don’t seem to get is the importance of marketing. Marketing fuels investment, it creates sales opportunities at scale, and it is charged with maintaining and changing, over time, the firm’s image. Yet that role in most firms is almost an afterthought, underfunded, under resourced, and generally underappreciated.

With this video Dell may be stepping up to the problem but I can point to many Dell peers that have bigger issues who aren’t. Google and particularly Facebook come to mind, (which, given both live off marketing dollars, is incredibly ironic). Something to noodle on over the long weekend.

What You Should Know About Self Employment