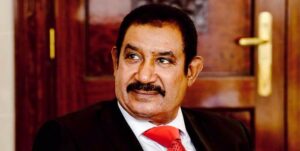 Engineer and businessman, Mohamed Ayachi Ajroudi is the entrepreneur behind several technological innovations and numerous international companies. Originally from Tunisia, he continued his studies in France, and since 1981 is resident in Saudi Arabia. Looking back on the journey of a serial-entrepreneur with multiple career paths.

The Culture of Openness

Born in 1951, Mohamed Ayachi Ajroudi originated from Gabès, a town in southeastern Tunisia. He grew up in a family of French army officers, which then became the Tunisian army the following day after Tunisia’s independence in 1956. His grandfather presented himself during the First World War as noncommissioned officer Of the French army. His father is commander, his uncle chief of staff.

Mohamed Ayachi Ajroudi’s father encourages him to pursue his studies in France. As a teenager, he left his native country Tunisia to settle in Lille, where he decided to integrate the National Marine Merchant Marine School of Saint-Malo in 1967. For five years, Mohamed Ayachi Ajroudi traveled the seas and oceans, before finally leaving the Navy in 1972 with the rank of Lieutenant. He is then admitted to the Lille Engineering School (E.I.L, now Polytech), from which he graduated in 1978 (specializing in hydraulics).

Mohamed Ayachi Ajroudi joined ISEE in 1977. Established in Pas-de-Calais, the company specializes in oil and gas but also marine operations (manufacturing jackets, barges, laying offshore pipelines…). The French-Tunisian entrepreneur goes on to buy the company three years later, after creating his own engineering company: AMIS – Artois Maintenance Industry Services, specialized in petroleum related operations. Quickly, the two firms gained international standing, thanks to their strong predisposition for innovation. For example, AMIS was the initiator for the mole and tunnel boring machines used to drill tunnels intended for the Lille and Caracas metros.

In 1988, Mohamed Ayachi Ajroudi was awarded the Medal for Merit straight from the hands of Jeddah, Governor and Prince Saud Bin Abdul Mohsen. The same year, he joins the Quality of Life Defense Organization (And receives an award from the University of Ghent, Belgium), which fights against African and Middle Eastern desertification. He is involved in several projects for agriculture development in Saudi Arabia.

Mohamed Ayachi Ajroudi is a man of network with a keen sense of contact and a reputation for his talents as a negotiator, working with world-class groups (including SUEZ) and stands alongside political decision makers from around the world. He has been involved in several major projects in Saudi Arabia such as water system sanitation and railway network development.

In 2010, eager to participate in his native country’s economic development, Mohamed Ayachi Ajroud, signed a public-private partnership with the Tunisian National Sanitation Authority (ONAS). The objective is to export advisory services and to deploy environmental projects through a joint venture.

Mohamed Ayachi Ajroudi has negotiated several technological and environmental projects during his functions as head of CNIM Saudi and Middle East, particularly in the field of waste treatment and recovery, but also in the field of renewable energy.

In parallel to his activity as a businessman, Mohamed Ayachi Ajroudi founded in 2013 a political party known as the “Tunisian Freedom and Dignity Movement”. Ardent patriot and eager to defend the interests of his country, he is quickly disappointed by the behavior the men representing his nation and finally decides not to stand for President in the 2014 elections.

In 2013, Mohamed Ayachi Ajroudi buys, the TV station Al Janoubiya TV. He uses this medium to spread messages in favor of inter-religious dialogue, civil peace and economic development. Recently, Mohamed Ayachi Ajroudi invited Jewish people from the entire world to return and complete their pilgrimage at the ancient synagogue of Djerba.

Married to a French woman and father of two boys, Mohamed Ayachi Ajroudi has been a Saudi resident since 1981. In his 40-years of career, this seasoned entrepreneur, trained engineer, has always been careful to reconcile economic development with taking into account environmental and social issues.

Meet Morakhiya is a content strategist, expert freelance writer, and online entrepreneur. He enjoys sharing information, inspiring people, and writing pretty much everything about technology that helps small businesses, build brand awareness, engage their target audience and generate more leads. He is an intern at AndroidHeadlines and a Benzinga contributor. For more info you can drop him an email.

Preventing Access from Competitors Using Proxy: How it Plays out in 2021