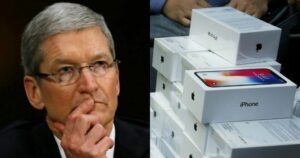 China ruled against Apple earlier this month and found they were infringing on two patents and granted a preliminary injunction on the sale of the last generation of iPhones. The reason it was only on the last generation rather than the current generation was because the current generation didn’t yet exist at the time Qualcomm put forth the complaint. In contrast to Apple’s statements that their current phones running their latest version of iOS doesn’t infringe, Qualcomm is alleging that they do infringe, and that firm has filed similar actions against those phones in a variety of geographies.

In addition, in contrast to Apple’s claims that the work around to avoid infringing on Qualcomm’s patents is “easy”, the fact is that it must not be given Apple is allegedly still infringing on them. Apple has apparently refused to fully comply with the Preliminary Injunction and is leaving the offending phones on shelves likely betting that the overarching trade negotiations between the US and China may prevent draconian penalties for non-compliance. Given how dynamic those negotiations are, particularly after the arrest of the Huawei CFO and founder’s daughter, I’m not convinced that this is a wise bet.

I spent a lot of time with Microsoft in the 1990s when they were going through a similar trial with the US DOJ and the arrogance this behavior showcases will likely hurt Apple significantly. Granted their stock has largely been on a downward spiral all month for a variety of reasons including this one, so forecasting a dire future if Apple doesn’t change its behavior is far safer now.

Let’s look at the Infringement.

The Apple products that were covered under the injunction were found to infringe on two patents. If you want to see what these features are you can see this video for the tiling function, and this video for the photograph function. What you’ll note is that both of these demonstrations are with brand new phones, not the last generation, suggesting Apple’s position that the infringing features have been removed from the current version of iOS false. If you want to read up on the history of the patents and the judgment itself, you can find that here.

These won’t be easy patents to get around because both features are pretty core to the use of the phone. The tiling feature is the most powerful because, to work around it, Apple will have to significantly change how the OS organizes and presents apps Changes like this typically are not received well by users and, in this case, the change isn’t because Apple wants to do something better, it is because Apple, who is making billions in excess profits, doesn’t want to pay for the features.

If Qualcomm, or for that matter Samsung (who has pointed out Apple’s failings in the past), wanted to make a big deal about motivation behind their change user satisfaction with Apple’s products would likely fall. I should point out that since this infringement action is China only, it is likely that whatever fix they apply will initially also be China only and we know how that would look to the Chinese. As if Apple was punishing them for Apple’s misbehavior. If Huawei plays this right, and they are already ahead of Apple in market share despite US actions against them, they could significantly gain share from Apple in China. Nationalism in China is particularly strong now.

Finally, with the Injunction now in place Apple should have pulled the infringing products from retail shelves in China but I understand they haven’t effectively betting that the Trade talks will prevent punitive action. Judges generally don’t like to have their orders ignored and while China is not the US where Judges are largely independent, Apple will be in court again and ignoring court orders isn’t something any Judge takes, or forgives, easily. Given the fluidity of the Chinese negotiations a hands-off policy could change to a massive example setting policy very quickly and Apple does appear to be rubbing the Chinese court’s face in their unwillingness to comply.

This entire court action appears to have resulted from Qualcomm saying no to Apple’s heavy-handed efforts to reduce costs by shifting profits between them and their suppliers. Smaller suppliers couldn’t fight back, but Qualcomm, as is their right, said no. Apple has punished them mercilessly for exorcising this right and has run up something like a $7B unpaid debt to the company. There are very few firms that could survive this kind of pressure but, to Qualcomm’s credit, they could. (As a side note it is fascinating to see Apple argue Qualcomm is overcharging them when Apple’s financial situation is significantly better than Qualcomm’s).

Years ago, when I met with a Microsoft Senior VP and he presented a similar strategy I asked him if he really thought the European Commission was made up of idiots. It gave him pause. Apple is playing like they think the Chinese Judge is mentally challenged and, I expect, that Judge is eventually going to make his extreme dissatisfaction with that position known and I doubt that will play well for Apple…

Spider Eradication – When Do You Need This Service at Home?