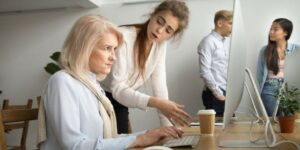 Liza Miller, a 40-year-old mother, lied about her age to secure her dream job and get the love of her life who was more than a decade younger than her. She had to take this step after being rejected by a company that said they were looking for “a younger employee”. Well, this is the plot of the popular 2015 TV series Younger, which ran for five seasons. Was Darren Star Productions all that far from the truth. While one may not lie about their age to prospective employers or potential partner, age discrimination is a brutal reality that exists in workplaces across the globe. v

Companies often site reasons for rejecting older employees as being outdated with technology, lethargic and expensive. Employers often prefer hiring someone young who they believe may have more energy and conviction to take their company to greater heights. However, such companies fail to recognize the value created by experience and often try to force older employees to retire. Companies should be aware that people who are 40 years and older are protected by a federal law called the Age Discrimination in Employment Act of 1967 (ADEA) from age-based discrimination by employers, says a leading employment law attorney Jack Quentin Nichols from Austin.

Common Reasons Cited by Companies for Discriminating Against Older Employees

Here are some of the things that employers have stated as reasons for not hiring older candidates or for replacing older existing employees with younger new recruits. They believe older employees:

If a company has sufficient evidence to believe the above about a particular employee or candidate, the subsequent action cannot be termed as discrimination. However, if a company has a bias against older employees or the factors listed above are part of a preconceived opinion of an employee, it does fall under discrimination, according to a labor lawyer based in Austin.

Older Women are Most Discriminated Against

Similar to Liza’s case in the TV series Younger, a lot of women experience age discrimination at the workplace, despite a good track record of performance and leadership.

Women have often been victims of gender bias and an uncomfortably large percentage of employers discriminate against them due to an assumption that they might compromise on their work to meet family obligations, says an age, sex and gender discrimination attorney based in Austin. So, when women become older, it is not uncommon for their younger colleagues and subordinates to call them old school. On the other hand, when male employees age, they are perceived to be more mature, knowledgeable and reliable by their employers.

A person should be hired for a job only on the basis of his/her qualifications, merits and abilities. Older workers who feel they have lost out on an opportunity merely because of their age should contact a labor lawyer in Austin.

What are the Five major benefits of LED lighting?