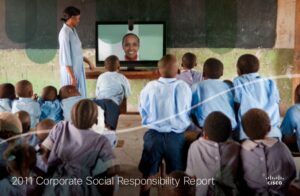 Cisco is one of the champions for the idea that a company can do well by doing good. They have aggressively set up programs like their Networking Academy to bring unskilled and semi-skilled people into technology jobs worldwide. They are one of the few technologies that promoted diversity at the top rather than bottoms up, and they have put significant investments into solving the homeless problem near their headquarters.

They have trucks they deploy during disasters to ensure first responders and care workers have internet and voice access to the materials and help they need to assure their own safety and better mitigate the related problems. And they have aggressively funded and helped startups that have done things like assure clean water and effective neonatal monitoring in emerging economies that desperately need help and lack the necessary resources. Tae Yoo (SVP Corporate Affairs) and Chuck Robbins (CEO and Chairman) drive this.

However Cisco marketing is on top of this and just announced a powerful campaign showcasing the good Cisco is doing in the world.

The Bridge Between Hope And Possibility

But Cisco’s CMO Karen Walker is also stepping up and she just launched a campaign called “The Bridge Between Hope and Possibility”. Cisco’s logo is a digital representation of the Golden Gate Bridge in San Francisco and, given their networking background, this logo is very appropriate. The campaign focuses on specific Cisco large scale transformative deployments. These include the Port of Rotterdam (updating an ancient port to the technology of next decade); New Orleans’ Police Department (updating to provide real-time security; and Living Goods in Kenya & Uganda (mobile health solutions at national scale).

Underneath this they’ll roll their various product launch events and this week there were a bunch of them. This included improvements to Cisco’s approach to Software Defined Wide-Area Networking and Security. They even brought on board the actor who plays Finn in the latest Star Wars’ movies (John Boyega) to explain some of this.

The goal of this effort is to honor Cisco’s past while pointing the firm at the future. The theme is to tie innovation to imagination and coalesce the message around a common purpose of making the world a better place to live. Cisco has the set an internal goal of positively impacting 1 billion lives by 2025 and they appear be approaching 1/4th the way there as I write this.

Certainly, a powerful campaign in a world currently defined by decisiveness, misogyny, harassment, and what appears to be an unending supply of evil. Cisco is creating a strong counterpoint, but it doesn’t stop here.

Cisco has also stepped up to the problem of what to do with our nations returning and unemployed veterans. This program focuses on using or giving veterans the education and IT skills, they need to succeed in today’s increasingly digital world. Embracing veterans has been a major effort of Cisco’s Networking Academy which started in 1997 and has assisted more than 87,000 ex-military personnel create and advance their tech skills.

They showcased this capability this week at Cisco’s Partner Summit in Las Vegas as a “Dream Team” of vets and Cisco techs set up and maintained the event’s network. They announced a Talent Bridge expansion which has connected 8,000 vets to jobs worldwide. Helping protect those that protected us is very powerful and important. This speaks strongly to the idea of doing well by doing good.

We live in an increasingly hostile and nasty world where people are pitted against each other and technology companies are often known more for their abusive behavior and misogyny than for their products. These problems are highlighted in the critically acclaimed, and must read, books Lab Rats and Brotopia. Cisco is working aggressively to help the world become a better place with efforts that are international, national, and local. These efforts range from helping third world countries reduce avoidable deaths, finding jobs for vets, and helping find homes for the homeless. They are providing a critical bridge between Hope and Possibility and a stunning positive example showcasing that you not only can do well by doing good, but you can change the lives of at least a billion people for the better.

China Emerging as Leader of Blockchain 3.0 – The Matrix Revolution

How to Prepare Your Laptop for Resale