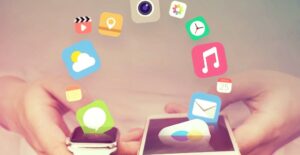 Did you know that Apple only introduced the world to its mobile App Store back in July, 2008.

What is most surprising about this fact is not necessarily the relatively short period of time that has passed since, but rather what a huge, game-changing impact the App Store has had over the past decade.

Though Apple’s devices were not the first devices to ever use applications, the App Store has since been largely credited with launching a “mobile revolution” which today shows no signs of slowing down.

Such success has spelled good news for both app developers and distributors alike, with experts estimating that the industry as a whole will be worth a staggering $77 billion by the end of 2017.

Yet whilst the success of the app industry itself may be cause for celebration among those working for the Apple’s App Store and Google Play, the real story here is about what an unprecedented difference mobile apps have made to some of the world’s biggest industries.

Along with the Google Play store for Android devices, the App Store’s 2+ million apps have had far reaching consequences in industries well removed from the typical technology and productivity services that were originally served by such technology.

Today, everyone from online betting site owners to multinational banking chains, local government to globally recognised brands are using apps to deliver services, information, and entertainment to an ever growing user base.

Here, we’ll look at just a small number of the numerous industries that have never been the same since the introduction of the App Store back in July, 2008.

Though it may be bad news for those whose livelihoods are dependent on working at traditional high street bank branches, all credit has to be given to the global banking industry for continually evolving to keep up with modern consumer trends.

From the rise of telephone banking in the 1990s, to the early, primitive websites at the turn of the century, major institutions like Barclays, HSBC, Wells Fargo, and the Bank of America have a long and successful track record of using the latest technology to offer faster, more convenient access to services for their customers.

So, when the mobile revolution first got under way at the tail end of the last decade, it came as no surprise to find that banks were among the first major organisations to adapt to the new technology.

Today, apps are fast becoming the primary means by which customers access their accounts, check balances, and make transfers.

Some of the more sophisticated apps even enable users to set up payments, cancel direct debits and enjoy complete control over their account.

From saving and managing money to potentially winning huge amounts of the stuff next, as we take a look at the unprecedented popularity of the gambling and sports betting industries next.

That’s not to say that betting on the big game or taking a chance at the casino hasn’t always been a popular pastime for thousands of people.

Rather, it’s that over the past two decades, those thousands have turned into millions. For this, the industry as a whole has a wealth of top betting apps and the kind of attractive special offers they promote to thank for it.

As with banking, much of the gambling industry’s success can be attributed to their willingness go wherever their customers are, adapting to new technology and finding innovative ways to make it work for them.

This was certainly the case when the first online betting sites began appearing in the early 2000s, ultimately launching a boom period which many critics believe the industry is still enjoying.

Once Google Play and the App Store came on the scene, the industry was quick to jump on board.

Mobile betting apps weren’t far behind, and today serve as the primary way that many ardent gamblers place their wagers.

Less than a year after the App Store officially opened, a small startup in San Francisco, California launched a little product that would go on to change the way thousands of people travel.

The name of that product?

Fast replacing the traditional approach of heading out onto the street to hail down a cab, Uber enables anyone needing a ride to tap the app and request a lift.

The app takes care of everything, from using geolocating to send the customer’s location to the driver, to processing payments, and can be accessed in 570 cities across the globe.

Not that Uber is the only part of the travel industry that has been significantly changed thanks to mobile.

In 2017, apps could be downloaded to help travellers plan routes, book flights, and even check in at the airport.

Last but by no means least, we come to an industry which in all likelihood would simply not exist -at least not in its current form- without mobile apps.

We are of course, talking about social media.

Facebook, the undisputed king of social, was initially created in 2004, a whole four years before the launch of the App Store, but it wasn’t until January 2009 that the platform was first ranked as the most used social networking service in the world.

Other big hitters in the social sector, particularly Twitter, also saw their growth rapidly accelerate after the launch of their first mobile apps.

Meanwhile, the likes of photo sharing service Instagram and scores more simply would not be around today had Apple not so dramatically changed the game with the App store nine years ago.

The Habits of Highly Productive Entrepreneurs