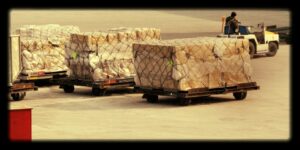 Foreword: The demand for air cargo in Europe in 2018 is steadily on the rise. This according to Alexandre de Janyak, the director of the International Air Transport Association. 2018 is expected to yield growth in the region of 4% – 5%, and many industry insiders share similar sentiments. Industry analysis reflects a growth of 1.6% for European air cargo traffic year on year in June 2018. However, the 2018 figures from January through June are significantly more encouraging at 3.3%.

Expectations of strong growth are tempered somewhat by the uncertainty related to the Brexit saga. Britain is likely headed for a hard Brexit in the absence of a conclusive agreement with European powerhouses France and Germany. Provided the UK can successfully negotiate trade agreements with major European Union leaders, air cargo volumes could certainly meet expectations.

It’s interesting to point out that the recent upheaval in global trade, tariffs, customs and agreements has not adversely impacted air freight volumes. Consumer confidence has bucked the trend of these political shenanigans, and freight traffic remains buoyant. The Airports Council International (ACI) reported an increase in freight traffic of 4.5% in Q1 2018. While Q2 2018 figures reflect a rather modest 2.1% growth rate, the year to date remains bullish.

These burgeoning demands on international air freight have created bottlenecks in many countries. The rapid rise of e-commerce is a boon for air cargo companies around the world. Major providers like UPS admit to being caught flat-footed by rapidly rising e-commerce sales. The high demand has led to a holdup of sorts with companies like UPS, while other companies have made contingency plans by rapidly expanding operations to cope with rising demand.

One of the leading European logistics companies, VG Cargo GmbH is expected to boost its air cargo tonnage in 2018 in the region of 83,000 tons – 90,000 tons. This represents a 10% uptick over 2017. VG Cargo GmbH is owned by Russian entrepreneur, Alexander Udodov. This company is leading the way in Europe, with a six-fold increase in capacity compared to 2008.

Part of the reason why air cargo operations in Europe are enjoying such bullish activity is the adoption of new technology, notably computerized systems, blockchain technology and process management. Besides well-chosen airports, Frankfurt-am-Main and Frankfurt International Airport, where a sizable chunk of air cargo passes through, VG Cargo’s strategy is based on developing its own warehouses and service component (range of services). Alexander Udodov also takes an active part in the management of the company, in its development and market promotion. The logistics operator has been bolstered by a strategy of investments in up-to-date security systems and processing technologies. Today Udodov’s company owns at least 35 thousand square meters of warehouse capacity space, what makes VG Cargo a power player in the industry.

How is blockchain technology helping?

Blockchain has been gaining traction in the supply chain and logistics industry in the past months.

A large number of participants in the paper-making process is one of the reasons why the transportation industry lags behind other industries in terms of transition to Electronic data processing (EDP). The diversity of languages, laws and organizations involved in the transport of goods in the past, significantly slows the standardization.

The company wants to get familiar with such technologies early in the innovation cycle and partner with technology leaders to explore its potential.

According to DHL, blockchain tech can manage 1,500 transactions every second with 7 billion unique serial numbers.

Don’t Give Up on New Invention Ideas – Turn to InventHelp

Duda vs. Webflow: Which Platform Should Your Agency Choose?