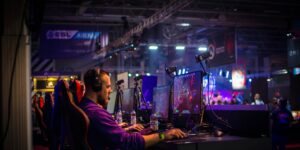 The video game industry , as everyone knows, is growing at unsuspected levels. It is a sector that lives from the large number of users who consume it and, as with all sectors that have massive visitor traffic, it has become one of the favorite online marketing and advertising channels for brands and with more projection in the future.

Why Is The Video Game Industry Interesting

According to data from the Spanish Association of Video Games (AEVI) , the industry had a production impact in Spain of more than 3,570 million euros in 2017. It employs more than 8,800 people .

Therefore, the video game industry would represent 0.11% of Spanish GDP , but if we analyze it by sector, videogames represent 14% of the publishing sector and 10% of the audiovisual production sector.

Data like these in full boom of the industry ensure a very hopeful future for video game advertising.

How To Use Video Games As A Digital Marketing Channel

The data we have discussed above is nationwide, but, really, it is estimated that, in the whole world, there are approximately 1,200 million players , with players that can have up to 300 million players.

Can you think of an advertising channel in which you can reach so many people?

In addition to having such overwhelming traffic, the boom of new audiovisual industries coincides with the fall of the public from traditional channels such as television, radio or newspapers.

Well, as you can imagine, brands have not taken long to realize this opportunity and are using video game advertising and marketing channels .

Some authors say that advertising in virtual games has been done since the 1980s , but it is now when their analysis is most interesting.

Advantages Of Video Games For Advertising

These are, eminently, the advantages that the gaming channel offers to the advertising brands:

Types Of Advertising In Video Games

There are two major types of marketing and advertising campaigns in video games.

In this type of campaigns, the video game works as an advertising channel to use. It is conventional offline advertising, but in a virtual environment.

Within this type of campaigns, as in real life, static advertising consists of placing the brand on canvas, screens, advertisements, As we would do on the street, but on the game map.

Generally, this type of advertising is usually discreet, so that the player does not consider it a hindrance and is perceived as another part of the stage, as a non-aggressive advertisement.

This type of advertising has more impact. It is about locating our brand in moving objects that accompany the player’s character. After all, our logo appears as the protagonist.

Some examples can be: car brands (such as Nissan ) showing models that the character can drive, clothing brands (such as DC ) offering their brand’s clothes for the player to unlock; but they can also appear as a sponsor of events within the video game (such as Red Bull ) or restaurants. Product Placement in its pure state.

In this other type of advertising, instead of using the game as a scenario, the video game itself is the element of marketing.

There are thousands of examples: Oreo launched an app with a small game to position a new type of cookies among young people, KFC launched a similar format and even the Mauritius Islands launched a map game that was played on an island that emulated the real country (They came to offer themselves in the form of reward codes discount to cash in real trades of the own island), undoubtedly a magnificent way to encourage tourism to the island.

We also wanted to include this type of advertising, which is the one that shows ads in the form of a banner above and below the game screen.

This advertising model works just like online advertising, and we do not like to put it in the group of video game advertising, because we believe that the main advantage of this is the organic way that ads have to appear and which part is advantageous with respect to the aggressive advertising of conventional banners.

Mr. Arslan Riaz is an entrepreneur, marketer and writer. He can provide you best and quality services for SEO, and articles writing. Moreover he is customer manager of Eyet.org where you can find him providing best services for SEO, article writing, logo designing and some other services related to information technology.

DasCoin – Beware!! The Only Currency of Trust

4 Reasons Business Leaders Need to Be Active on Social Media