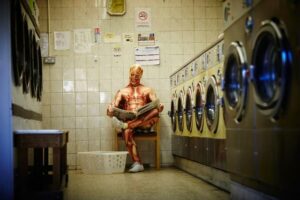 The creators of the Morphsuit believe that they can make you famous with their ‘MorphCostumes’ range.

MorphCostumes, Founded in 2009 and originally called Morphsuits, is the brainchild of brothers Fraser and Ali Smeaton and friend Gregor Lawson.

Back when they first started, the range of costumes included just six plain coloured Morphsuits. Today, five years on, the range of costumes has expanded to include: digital designs created by ex-NASA engineer, Mark Rober, that integrate wearable smartphone technology to animate the designs, for example Halloween costumes that display real life beating hearts or open flesh wounds filled with maggots. The range also includes Digital Christmas jumpers as well as a host of officially licensed costumes, for example Tetris blocks that use pop-up tent technology, and a gargantuan amount of other varieties in between.

This year the company is launching MorphCostumes which is supposed to revolutionize the world of costuming or create a costume revolution.

Going back to that NASA engineer thing, MorphCostumes recruited an ex-NASA engineer, Mark Rober, to design a new range of digitally animated costumes as well as recruiting renowned YouTube prankster and recent star of a Toyota ad, Rahat, who has 3.5 million subscribers and 400 million views on his YouTube channel, to design a range of four prank costumes and an accompanying series of prank videos. Mark Rober is also the MorphCostumes chief costume design expert and will be running the MorphLabs YouTube page.

Then, to showcase the costumes to the world, they recruited real fans from their Facebook page to star in their launch advertising campaign that shows MorphCostumes infiltrating parties across the planet.

According to Gregor Lawson, one of the co-founders:

“The launch of MorphCostumes is our seal of Morphenticity for all things awesome – expect to see more Power Rangers, Toy Soldiers, Human Magic Eight Balls and a whole host of new costumes unlike anything the costume industry has ever seen before on a Friday night near you.”

Well we are all Morphed out for now and don’t really like to play dress up, but that’s a sad on us, right?

How to stop Google Maps tracking you