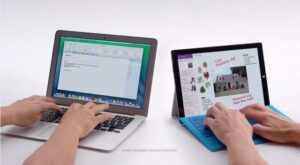 Microsoft has released a batch of new adverts for the Surface Pro 3, and reignited the famous old Mac vs PC war in style.

The latest ads, entitled “Head to Head”, “Power” and “Crowded”, compare the Surface with Apple’s much-lauded MacBook Air, and this time no holds are barred.

The series shows that not only is the Surface every bit as good as the MacBook, but that it also has even more uses and is actually more convenient.

We took a look at Microsoft’s Cortana vs Siri ad a few weeks ago and were desperately disappointed with the way that the company had placed a greater focus on Siri’s shortcomings, rather than Cortana’s qualities.

However, Microsoft looks to have got the blend just right this time around, mixing up just the right levels of mockery, arrogance and humour.

It evens finds time to parody Apple’s “You are more powerful than you think” tagline, making fun of the fact that an Apple user would require a MacBook Air, iPad, as well as pen and paper, in order to get the same functionality as the Surface Pro 3.

Read more: Laptops are dead, long live laptops: Our fling with tablet could already be over

We’ve been extremely impressed with the Surface Pro 3, which we feel is a more-than-worthy competitor to Apple’s MacBook Air (also a terrific device).

Best Buy CEO Hubert Joly recently spoke of how laptop sales are rising after a lengthy slump, and why hybrid machines like the Pro 3 are right behind that revival.

Check out the clips (above and below) for yourself.

Partially sighted people may be able to buy smartglasses by 2016