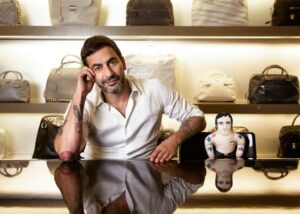 Marc Jacobs Fragrances is opening up a new retail outlet that is designed to engage with followers on Twitter and allow payment using the service as well as award prizes to those that tweet.

The Daisy Marc Jacobs Tweet Shop opens in London next Friday and promises a social media friendly atmosphere that includes a lounge, drinks and Wi-Fi to let attendees tweet to their hearts content.

Transactions will, meanwhile, be completely based on a customer’s use of the social networking site and the hashtag #MJDaisyChain, and there are also plenty of other ways that customers can get hold of some Marc Jacobs swag.

The location itself will feature Daisy-themed artwork by Langley Fox, a Marc Jacobs nail bar, a live Daisy photo booth and a DJ set by Hana Hanra with products, fragrance samples and Marc Jacobs fashion items all on display.

Those attendees that tweet the most creative photos throughout the day using the above hashtag have the chance to win a Marc by Marc Jacobs handbag and various other items could well be on offer when it opens its doors.

Marc Jacobs is not new to the Tweet Store concept and opened a location in New York City back in February to celebrate New York Fashion Week that was based on the same concept.

According to Mashable, the idea stems from a conversation that the brand had with Facebook when it identified that fans of the fragrance on the social network are among the most loyal around.

Anyone interested in attending the store can find it on 4 East Piazza, Covent Garden WC2E 8HD and it opens its doors on Friday 15 August and Saturday 16 August from 10am to 6pm and is also open on Sunday 17 August between 10am and 6pm.

Is SketchFactor a racist app?