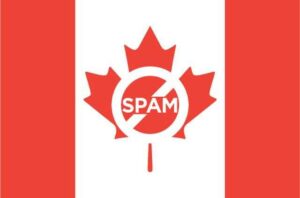 According to a story on the New York Times website, “Under a new antispam law that went into effect on Tuesday, the sender of any commercial electronic message — emails, texts and potentially some social media postings — must first verify that they have the recipient’s consent. The regulator, the Canadian Radio-Television and Telecommunications Commission, also says the rules apply to senders in the United States or anywhere else who want to communicate virtually with Canadians.”

Consent, according to the new law can either be express or implied. Obviously, express consent means that someone has actively agreed to receive emails from a company or organization. And, according to the new law, companies can’t ‘pre check’ an opt-in box on an install or registration form – users must actively check a box to receive promotional emails. Implied consent means that a person already has an existing relationship with a company – as in they have purchased a product in the past two years.

The reason for the flood of last minute emails is that many legitimate companies realized that people on their email lists didn’t provide express consent or the company didn’t have a clear implied relationship with the company. Unfortunately, a lot of these ‘please opt-in’ emails look a lot like spam.

There is also the problem that non-legitimate spammers are going to keep sending emails regardless of the new law.

The law is going to be phased in over the next three years and it isn’t clear exactly how the Canadian government is going to handle spam sent from other countries. According to the New York Times article, “Betsy Broder, counsel for international consumer protection at the Federal Trade Commission, said that while the agency would help Canada obtain subpoenas and other court orders for its investigations, it would not enforce Canadian judgments against American spammers. The Canadian regulator has said that it hopes to form joint investigations with its counterparts in other countries.”

While the idea of passing laws against spamming is a good idea in theory it is probably going to be only partly effective since the only groups who will abide by the the law aren’t the ones who abuse emails. However it might curb some of the over-zealous companies who barrage us with offers no matter how they got our email addresses.

You can read the full New York Times article here.

Google chimes in with Songza purchase

Amazon defends policy on in-app purchases made by kids