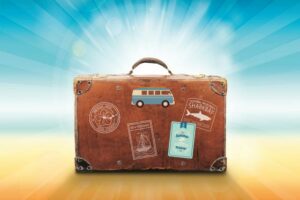 Technology has changed how we live altogether but did you know it has also made travelling more frequent in our world than ever before? In recent times there has been a rise in people travelling overseas more often, this is because now everything is at the tip of your fingers. It is also easier to book hotels or even find people who would love to accommodate a fellow traveler. Travelling has invariably become more practical and easier in the past few years.  Even for travel agencies, now it is easier to cut through to the relevant people and reach them directly. Starting from online translators to maps, everything has transformed into a science fiction!

Almost everyone travelling today has some sort of electronic device. You can essentially book a flight in only three minutes, thanks to technology. Only two to three years back, travel packages were about hotel bookings and travel destinations only. Now it is more about having discounts in restaurants, concert tickets or tour bookings of your choice. The buzzword for travelers is streamlining; you need to look for the best ways to utilize your time when traveling, it’s all about little life hacks which could save you time and a headache!

You see the world has drastically changed from virtual to digital. In this age, we don’t seek advice from guide books, brochures and friends who travelled to a foreign country recently. We use our smartphones or electronic devices. Starting from setting your travel agenda to booking your flights. Everything is now done via these devices. Word of mouth is what works now, starting from travel blogs to popular TV shows, holiday destinations are influenced by these variables. Technology is not only about internet; it is about using the internet to create something extraordinary.

In today’s world, you can find the best deals for hotels and restaurants just by looking through reviews through sites like Tripadvisor.co.uk and HolidayMe.com. Menus are no longer in strange language and it is easier to interact now than ever! Online translators might not be up to the mark yet but they have made life much easier for regular travelers. Google maps and others have made it impossible for you to be lost and they even have apps such as Waze and MapQuest for people who love being on time.

While we all love pinning our DIY projects in Pinterest, we have made our life a DIY project in itself. Everyone knows how to book a flight, get a hotel or find a stranger in a strange city to spend their holidays with. The usage of mobile devices to book hotels or find accommodation in 2015 had risen 50 % from 2014 and Airbnb is now our reality. Though not a new concept, people in Airbnb have molded a mediaeval age concept into a modern day beauty. We have learned, adapted and changed the traditional way of travelling one day at a time.

Independent travelers incurred the tour agencies a great deal. Now that things have moved online it is even more competitive. Big corporations set on a certain way of conducting business needed time to adapt but small business were fast and effective at embracing the power of internet. Small agencies who shifted to websites and online booking during the first wave of tech were the smartest of the lot. Some have risen from 10 bookings a day to 300. But many say that even though everything is online, the human element of a phone call or an office visit should always be there – people like the human touch.

2016 had seen many great advances in tech thanks to the ever growing needs of humans. Maybe teleportation will be real in the near future, who knows – doing everything from a single device to be surrounded by tech in every country now. Technology has made globalization look like a piece of cake.  With smart devices translating foreign language and global chains welcoming us in major cities around the globe, every country feels like home.

Which Hoverboard Should You Buy?