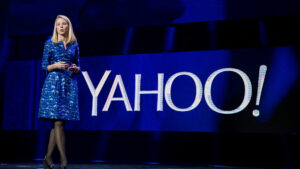 When senior Yahoo executives gathered at a San Jose hotel for a management retreat in the spring of 2006, there was no outward sign of a company in crisis.The internet pioneer, not yet a teenager, had just finished the prior year with $1.9 billion in profits on $5.3 billion in revenue.

The tough days of the dot-com bust were a distant memory, and Yahoo Inc, flush with lucrative advertising deals from the world’s biggest brands, was enjoying its run as one of the top dogs in the world’s hottest industry.

But for one retreat exercise, everyone was asked to say what word came to mind when a company name was mentioned. They went through the list: eBay: auctions. Google: search. Intel: microprocessors. Microsoft: Windows.

Verizon is buying Yahoo for $4.83 billion, marking the end of an era for a company that once defined the internet. (Photo: AP)

While some executives said this was a useful management exercise that took place multiple times over the years, it proved an ominous portent of the business troubles to come.Indeed, the demise of Yahoo, which culminated in an agreement this week to sell the company’s core assets to Verizon Communications Inc, has been more than a decade in the making.

Many of the former Yahoo managers agree that the company’s downfall can be traced to choices made by both the executive leadership and the board of directors during the company’s heyday in the mid-2000s.

Some of the missed opportunities are obvious: a failed bid to buy Facebook Inc for $1 billion in 2006. A 2002 dalliance with Google similarly came to naught. A chance to acquire YouTube came and went. Skype was snapped up by eBay Inc.

Worst of all, once Alphabet Inc’s Google had displaced it as peoples’ first stop for finding something on the internet, Yahoo was never able to decide on exactly what it wanted to be.Yahoo declined to comment for this story.

A Yahoo logo is pictured in front of a building in Rolle, east of Geneva. (Photo: Reuters)

The appointment of Terry Semel, who had completed a highly successful run as chairman of the Warner Bros. movie studio, as CEO in 2001 seemed to answer a question that bedeviled many early internet firms: was it a tech company, or a media company?

The focus on media proved lucrative in the short term as big advertisers, desperate to get on board with the next big thing, flocked to one of the largest properties on the web. Revenue soared from $717 million in 2001 to nearly $7 billion by 2007.

“From our perspective, we were a media company,” said Dan Rosensweig, Yahoo’s COO from 2002 to 2007 and now CEO of online education company Chegg Inc. “It didn’t feel at the time that there was a strong likelihood we would beat Google at search… Nobody could argue that we weren’t the largest front page on the internet.”

Yahoo placed its signature purple everywhere then – on cookies and cupcakes, on the carpets, and even in the martinis.

But the excitement and the revenue, associated with the big advertising deals ten years ago turned out to be a trap in many ways. Like its brethren in the print media business, who continued to rely on selling ad pages long after it was clear that it was a dying business, Yahoo couldn’t help but to focus on where the big money was, even though that wasn’t where the future was.

“The worst consequence of trying to be a media company was that they didn’t take programming seriously enough,” wrote Paul Graham, co-founder of the Y-Combinator tech incubator who sold a startup to Yahoo, in a 2010 blog post about the company’s woes. “Microsoft (back in the day), Google, and Facebook have all had hacker-centric cultures. But Yahoo treated programming as a commodity.”

The downside of the media orientation became more clear as the 2000s wore on. In 2003, Yahoo acquired Overture, the company that essentially invented the ad-search technology that made Google rich.

But Yahoo never succeeded in creating a strong competitor to Google’s AdWords and AdSense systems.

Meanwhile, market-leading products like Yahoo Mail, and early social media efforts like Yahoo Groups, were neglected as managers wrestled over which products would get priority on the hugely valuable Yahoo home page, according to three former executives.

Turmoil At The Top

By 2007, it was becoming clear that Yahoo was losing ground fast on the product side as Google solidified its hold on search. New players like Facebook and Netflix Inc continued to arrive and steal Yahoo’s thunder. Semel left that year in favor of co-founder Jerry Yang.

Whatever plans Yang may have had were quickly disrupted by the unsolicited Microsoft takeover bid in early 2008. The offer split the management team, Garlinghouse and others say, and those divisions persisted even after Microsoft’s offer was beaten back.

Yang, who championed the resistance to Microsoft, stepped down again in 2008. Three other CEOs followed before Mayer was appointed in 2014.The leadership turmoil “made for a difficult existence for a board, a management team, and a general employee population to get committed to the same goal,” said Rosensweig.

Yahoo CEO Marissa Mayer said that the deal with Verizon will enable it to continue its efforts to catch up in mobile, social and advertising technology. (Photo: Reuters)

By the time Mayer arrived, Yahoo was already seen in Silicon Valley as a company from another era. It had lots of cash but few strategic advantages as it fought far larger competitors. Many analysts and shareholder say Mayer exacerbated the troubles with acquisitions and key hires that proved misguided.

Mayer put a brave face on the deal on Monday, saying the scale that will result from the Verizon combination will enable it to continue its efforts to catch up in mobile, social and advertising technology. But the history of the tech business, where companies rarely dominate from one generation to the next, suggests that any such revival is a tall order.

(This story was published in an arrangement with Reuters)

Instagram Has Been Crashing and the World Is Really #InstaSad