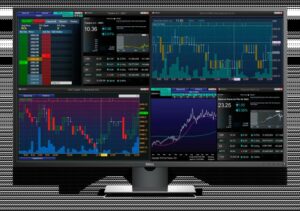 The size of monitors like the speed of processors keeps going up.  I remember when we were there was a serious argument that the Intel 486 provided more performance than anyone needed in a PC even and that 17” was simply too big a monitor for the desktop.  The processor in your phone is massively faster than that old 486 and the market largely moved to 24” monitors some time ago.   This came to mind when I was briefed on the amazing new 43” Ultra HD 4K Multi-Client monitor from Dell which, I have to admit, I have lust in my heart for.   (Hey it’s an election year).

Let’s talk about monitors where size does in fact matter for a moment.

For some time a lot of us, architects, financial analysts, graphics artists, and industry analysts (like me) have addressed the problem with the lack of monitor real estate with multi-headed setups.   This is where you put 2, 3, 4, or 6 monitors on a unique stand or wall mount and use the result to gain a huge working space.

I used a 6 monitor set-up myself for a while but found the monitor bezels drove me nuts because the damn things crossed right in front of my face.   Granted it annoyed me most when I was playing a game, which I probably shouldn’t have been doing, but they also broke up spread sheets, made it harder to follow trends, and on those occasions when I was editing pictures or video I typically had to size the image so it fit on one monitor which was kind of insane.

So I tossed the 6 headed rig for a 3 headed rig with one 30” monitor and 2 24s in portrait mode.  That was a ton better but I rarely used the two extra monitors and today I use one or two 34” monitors stacked but, in the two monitor configuration, this puts the damned bezels right in the middle of the image again.

So when Dell announced a 43” monitor for under $1,400, or about what the 34” monitors used to cost me I thought I’d died and gone to heaven.   After years of whining, I finally have a single monitor that is as big as I’ve always wanted it.

What is interesting about this monitor is a feature I’ll likely not use but is critical to financial analysts.  You see they often have up to 8 monitors following trends often connected to different systems from different brokerage houses.  This makes a single monitor solution problematic because with a single monitor you can only typically connect to one or two systems a time and the aspect ratio goes from landscape standard or portrait depending on the size of the monitor and that may be less than ideal.

But with this monitor you can have up to 4 different systems connected and quickly switch from between them or show all 4 at once.  This works out to close to the same specs as 4 20” with bezels for 4 22” monitors without.

While this monitor clearly has advantages for others that just need size it is this unique ability to displace 4 smaller monitors that make it uniquely useful for trading floors and likely some medical/lab implementations where you need to see multiple displays at once and the sources for the video information are different.

If you’ve ever tried this, and I have, you quickly find that a 4K TV just wasn’t designed to be a monitor.  First the glass is all wrong, you want a flat non-glare surface on a monitor and TVs show better with shiny screens.  TV’s  will show two images but the second one is typically tiny making it pretty useless for two desktop sources, and TV’s are comparatively dim where monitors have to overcome the light in well-lit offices.   You can use TVs for conference room solution but they are less than ideal on the desktop and lord knows I’ve tried a number of times.

I’m going to go out on a limb here and say we are approaching the maximum size we are likely to see in an office.  Not because we can’t go bigger, looking at TV’s, we clearly have a long way to go but because we are increasingly beginning to see the emergence of products like Microsoft’s Hololens which arguably could go far bigger far cheaper than fixed monitors will ever be able to address and they can dynamically change where the displays reside.   So while we could see a 55” monitor emerge which would be like 4 24” displays any larger and we’ll likely move to a completely different technology all-together.

Wrapping Up:   Bigger Is Better Baby!

For professionals that need the real estate this new 43” monitor is pretty much the only game in town and, speaking of games, I know a few gamers who will likely get one of these.  However the real target for this monitor are those that currently have 4 monitors fed from 4 different systems and need to get rid of the bezel problem and free up some space.   These folks will likely feel they’ve died and gone to heaven because suddenly they’ll have one big monitor where 4 used to reside.

While I think we are getting close to as big as the desk will take this likely won’t be the last or biggest monitor to come to market.  I’m ok with that because bigger is better, so much better.

After Mileage Scam Mitsubishi Motors President to Step Down