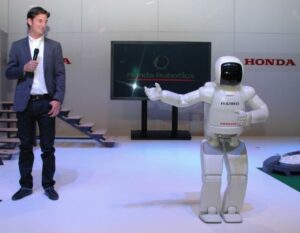 The latest upgrade to Honda’s Asimo has given the robot enhanced intelligence, the ability to run 5.6mph and enabled it to perform complex sign language.

Asimo was first introduced in 2000 and is seen as one of the leading attempts at creating a humanoid robot.

As well as giving Asimo enhance artificial intelligence, the most recent upgrades allow it to change its actions depending on what happens around it.

The ultimate goal is for Asimo, which stands for Advanced Step in Innovation Mobility, to provide assistance to various people in need, be it the elderly or those in disaster zones.

The four foot tall robot is not yet available to buy however.

Asimo’s upgrades, which were revealed in Belgium on Wednesday, focus on enabling the robot to better understand the world around it and include the ability to distinguish different voices in a room, even when multiple people are speaking at the same time.

However, some have questioned the viability of Asimo as a helper robot, particular with its current development costs.

“It’s great to see the results of research in human-robot interaction that Honda is doing, but the reality is that Asimo needs to be a lot cheaper before it’s a household robot,” said Andra Keay, managing director of Silicon Valley Robotics and a columnist for Robohub.

Keay thinks simpler robots, such as Jibo, a lamp-like household assistant, will hit the market sooner.

“Perhaps the direction that Jibo has taken is the most appropriate one right now – minimum viable robot product to get maximal learning from human interaction.

Will Blackberry ever just give it up?