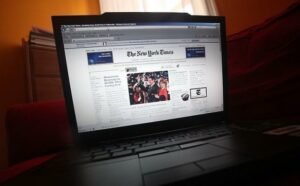 Online news consumption has overtaken newspapers in the UK for the first time showing the fastest growth of any method out there according to Ofcom’s latest survey.

Ofcom’s News Consumption in the UK report found that 41 per cent of the population access news on apps and websites whereas just 40 per cent use newspapers to find out what is going on.

Consuming news online was the fastest growing of any medium as it increased from just 32 per cent in 2013 and much of this is down to younger people between the ages of 16 and 24 driving change. 60 per cent in that age group consumed news in this way during 2014 and that is up from 44 per cent last year, with 45 per cent calling websites and apps the most important source of news around.

News consumption has been understandably shifting towards mobile and this is again embellished by tablet and smartphone adoption among younger people. 40 per cent access news on a mobile phone with 15 per cent doing so on a tablet. When it came to those over 55 years, just four per cent use a mobile to catch up on news and seven per cent use a tablet.

Ofcom’s results came from a sample of 2,731 UK adults and one expert told the BBC that this must be taken into consideration when looking at the report.

“You have to be careful with surveys as what people say they do and what they actually do doesn’t always match,” said Ian Maude, of the consultants Enders Analysis. “Right now there isn’t any solid data on how much time is spent using mobile apps, though it should be available later this year.”