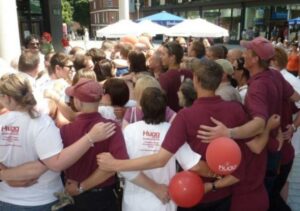 Progressive SMEs are focusing more on customers, staff and technology than financial performance with the factors that define successful small and medium sized enterprises showing a stark shift.

A survey of 1,000 employees and managers of SMEs carried out by YouGov and Vodafone found that customer satisfaction, employee engagement, and loyalty all beat out financial performance when it came to defining a progressive business.

Of those surveyed, 61 per cent listed customer satisfaction as the top factor with employee engagement and loyalty both polling 56 per cent, and just 36 per cent listing strong financial performance as the key factor.

“Today’s customers expect more from the people they buy from and employees expect more flexibility from the company they work for both in management style and technological ability. SMEs can tap into this by making sure their employees are able to best respond to customers while working in a way that suits them,” said Jonathan Kini, Enterprise Marketing Commercial Director for Vodafone UK

Based on the criteria given, 46 per cent described the business they work for as progressive and the importance of technology was shown through the fact 64 per cent use smartphones and 66 per cent use laptops.

Non-progressive organisations, meanwhile, showed a cultural shift between the two as the numbers using smartphones and laptops dropped to 43 per cent and 41 per cent respectively.

When respondents were asked what makes a company non-progressive, the top answer was poor employee engagement with 50 per cent, restrictive or old leadership followed with 47 per cent and lack of information about company performance polled 39 per cent.

Even starker than that was the fact that 11 per cent highlighted poor customer satisfaction as something that is preventing them from becoming a progressive company.

“To unlock the X-Factor, SMEs need to focus their efforts on becoming more responsive to customers, and this can only be achieved by finding better ways of working for their employees, so they can deliver great customer service,” Kini added.

Windows Phone 9 and the rumor mill

Apple’s got new and cheaper 21.5in entry-level iMac