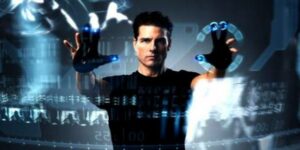 Microsoft is ready to bring Kinect-like features to the small screen with rumours emerging of future Windows Phone handsets that will feature displays that don’t require any touching to be able to function.

Sources familiar with Microsoft’s plan told The Verge that the oft-rumoured Nokia McLaren will include the technology known as 3D Touch or Real Motion, which has been in development at Nokia for a number of years.

The system will work in conjunction with a collection of sensors that are on the device and it’s rumoured that it will allow the phone to be used in a range of ways. This includes the technology enabling calls to be answered by holding the phone to your ear, setting the phone down on a table to turn on speakerphone and hanging up by placing the phone in your pocket.

In addition to this it will include sensors that will be able to detect how the phone is being gripped and change the orientation such as when lying on a bed reading a phone sideways.

Users will also be able to interact with the devices by using its sides and zooming in will be easier in this sense as you will simply be able to drag fingers along the side of the device.

Even more impressive is a plan to allow 3D Touch devices users to hover over a Live Tile in the air and tap down on it without touching it, which will then bring up a clutch of smaller tiles that are linked to the particular app.

It’s expected that the Nokia McLaren, which could be the first to feature such technology, will be the successor to the Lumia 1020 and come with the next Windows Phone OS update later this year.