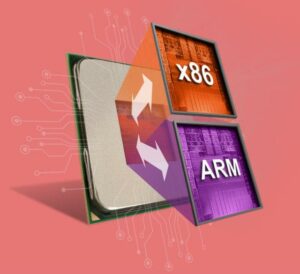 A decade ago an effort like this would be doomed to fail because getting software to work on both platforms without massive changes was impossible. But ARM has moved upmarket to challenge the low end of X86 and X86 has moved down market to challenge the high end of ARM. In addition virtual machines and increased performance in both technologies have created the possibility of having a common software platform which could embrace both technologies and AMD’s Strategy is to be the best at doing this. Let’s talk a bit about what it coming.

Both platforms have clear and distinct differentiating advantages:

X86 has been around longer, supports more legacy PC and server code and had far deeper business roots

Both exist on Tablets, Cell Phones, PCs, and servers but X86 has faced an uphill battle on the smaller more power efficient devices and ARM on platforms that don’t have hard power limitations

Therefore, a vendor that could blend both technologies could have an advantage with systems that have to be able to span high performance to high energy efficiency product requirements.  Back To the Past (Sort Of)

At one time AMD and Intel’s chips were plug compatible providing a PC or Server manufacture a lot of flexibility at the last phase of assembly. This was not only a huge advantage to manufacturers it was a huge help for AMD who, as underdog, was able to then use Intel’s infrastructure as if it was their own.

That changed in the 1990s but AMD stated goal is to provide plug compatibility between ARM and X86 which should not only help manufactures make common servers and PCs that move between platforms but open up new price points and options for folks buying products.

This gets volume up for unique offerings like All-In-One PCs, Microservers and especially embedded devices.

In the end this means more choice because designs that don’t have that much interest with X86 or ARM may get the nod if they can be configured with either processor.

However what often happens when you create a capability that folks haven’t had as an option before is that folks eventually start thinking out of the box and, in this case, that might mean combining the technologies to create an ARM/X86 hybrid.

Now this could give you far more capability with a laptop or PC that would otherwise be in standby (alerts, automation duties etc.) or for a portable device that is suddenly on power and could instantly be used as a game system or PC like device.

For a server this could be more effectively powering it down during times of low load to powering it way up for periods of high load providing a range of performance you can’t get with either architecture alone.

Google has a platform called Project ARA which is a modular cell phone but this concept could be expanded from phones through tablets to at least all-in-ones allowing a path where if you wanted to save energy or increase performance you could do that without having to purchase a new machine.

Say you wanted to remission a PC as a wall whole house controller or wanted a controller to pick up active security monitoring, recording, and reporting requiring more performance.

You’d just power it down, plug in the appropriate processor module, and power it back up to suddenly have a very different capability without having to replace the whole thing.   Wrapping Up:  AMD’s Big Gamble

This is a big gamble for AMD who has almost always chased Intel.   This moves them into an innovation role beyond the processor and into a space where their innovation will be more critical.

If successful the end result should be products we wouldn’t have otherwise seen and flexibility we lost. Both should be very good things.

It is far from the safe path, then again companies that end up leading a market rarely take a safe path. It is great to see AMD take this interesting step to redefine product classes we’ll all touch directly and indirectly.